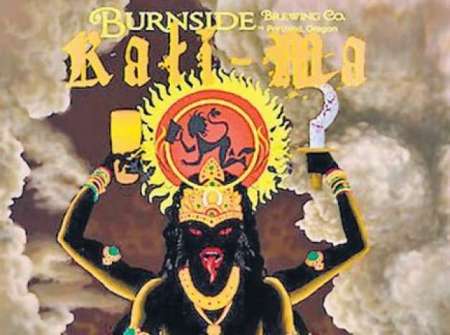 Burnside Brewing Co.:To those who have been patiently waiting, we humbly ask that you wait just a little longer and to anyone we have offended we sincerely apologize.

An American Brewery Company has apologized for naming a beer after Hindu goddess “Kali-Mata” and said it is currently scrambling to rename the product, amidst protest in the Indian parliament. The “Kali-Ma” beer which was scheduled for launch Tuesday has now been postponed till the Portland-based company ‘Burnside Brewing Co’ finds a new name for it. “Kali-Ma” the beer was earlier announced as spiced wheat ale involving cardamom, fenugreek, cumin, India dandicut peppers, etc., and showed the picture of Goddess with four arms and three severed heads.

In response to pleas from the Hindu community we have decided to postpone the limited release of “Kali-ma” our imperial wheat ale flavored with Indian spices and Scotch-Bonnet peppers. It is NEVER our intention at Burnside to offend or alienate any race, creed, religion or sexual orientation. …To those who have been patiently waiting, we humbly ask that you wait just a little longer and to anyone we have offended we sincerely apologize.

To this post an Indian Ashutosh Shrivastava suggested some name which maybe hit in US market with migrants as well as American:

As I hindu and an ardent beer buff, I really appreciate your gesture and look forward to the launch of the beer with a new name.Considering the fact that your beer has some flavours of Indian spices, here are some suggestions:

“Jai Ho” – It is a widely known slogan from an oscar winning movie called “Slumdog Millionaire”. It was also used as the election slogan by the current ruling party in India.

“Dobara” – Means “Second round”.. what fun is a beer if people dont ask for another.

A new book by a Pulitzer Prize-winning American journalist about life in the average Mumbai slum has been winning worldwide rave reviews. Katherine Boo’s Behind the Beautiful Forevers is a well-researched and well-written portrait of the trials and triumphs of the inhabitants ofAnnawadi, a slum that sprouted on polluted land near Mumbai’s gleaming international airport.

Boo isn’t the first outsider to chronicle Mumbai’s slum culture and poverty extremes. In recent years, Danny Boyle did it most famously in the Oscar-winning film, SlumdogMillionaire. But projects like this always raise questions — and hackles — of ethics and repercussions, in our local media and among social workers.

There are two concerns that always come up. One, what happens to the ‘characters’, the regular people who become involved in the project when the spotlight goes off? While Danny Boyle’s Slumdog Millionaire went on to red carpet glory, Rubina andSalim, two ‘original’ slum residents who featured in the movie returned to their lives.

Similarly, while Boo is back in the US, life for the residents of Annawadi goes on the same as ever. Boo’s book will probably win tremendous acclaim but what will it translate into for the people featured in her book, who, ironically, can’t even read what has been written about them?

And the other concern, the one that is more insidious, is the issue of a story being told through foreign eyes.Any good journalist needs to be ruthless and ‘mine’ for goodstories. And Boo has clearly worked hard, spent a great deal of time, making friends, winning people’s trust and integrating herself into the slum life, even attending a village wedding with one of residents. Yet, this is a ‘Western’ account of poverty in India. Is this why the book has gotten so much mileage? Probably. Does this mean Boo’s chronicle is inaccurate? No. In fact, it is probably too accurate which is what ruffles Indian feathers.

One of the characters in Boo’s book is Manju. At the time the book was being researched, Manju was studying for a BA in English Literature, and was running a day-care centre out of her home, funded by a non-profit organisation, which is a commonpractice in a lot of slums. Manju, as described by Boo, is a soft-spoken, pretty girl, keen on moving on to a middle-class life, which she hopes to do by educating herself. Nearly four years later, Manju has completed a B.Ed and is studying for an MA degree and, coincidentally, is now a teacher with the non-profit organisation that I work for. This, she says, is a move up and in the right direction for her.

Manju speaks fondly of Boo saying that they are still in touch and keep texting each other. She says she read the chapter on herself and found it interesting, though I am sceptical of how much of it she understood because this is also a chapter that describes her best friend’s suicide. I ask her how she felt about this. She says she was sad when she read about her friend’s death and relieved her grief, but is happy and flattered that she herself has been written about in such a good book. I wonder if this is an auto-response and try framing the question another way.

“Did you feel bad when you read about the slum and how people live?”

“No, what’s there to feel bad about? It’s the reality.”

Manju’s answer is pragmatic. If there’s any outrage at the slum life being ‘mined’ for an outside audience, it doesn’t seem to be in her mind. In fact, she tells me, Boo’s book has helped her. A reader in the US, who had read Boo’s book, got in touch with Manjuand sent her money which is financing her MA course.

This is probably the best response to silence critics. If it helped a girl get an education, isn’t that what ultimately matters? (courtesy: DNA)