Internet intermediaries in India are not willing to learn lessons from their past mistakes. From time to time objectionable contents have been appearing in both print and digital formats of press and media. This is despite that fact that such publication is criminal offence under various laws of India.

Recently, a nude picture that was published in Kolkata’s Telegraph edition caused a furor among the citizens, leading to a road blockage for over six hours. The same picture was also published in Hindustan Times that was subsequently taken down from the electronic version of the paper/website.

There are many pertinent questions to be asked about the unbridled (and burgeoning) use of Facebook, Twitter and other social media as a source of news by newspapers and TV stations—not to mention websites like these.

One of those questions faces The Telegraph, Calcutta, which carried a picture* posted by the actor-stripper Poonam Pandey on her Twitter account (@iPoonampandey) in its tabloid t2 section on Monday.

In the picture*, Pandey—who threatened to pose nude if India won the cricket 2011 World Cup—stands naked with a photograph of “God” as an offering to Sachin Tendulkar, who scored his 100th hundred in Dhaka last week.

“Thinking what pic should I gift the “God of Cricket”…. This historic moment reminds me of an old pic which one of my fans had morphed…. this was the pic….”

The use of a tiny picture* in a city tabloid to celebrate the momentous occasion has resulted in a fullblown communal issue in Calcutta.

“Some people are trying to stoke violence over a photograph published in a newspaper. I appeal to all members of the Hindu and Muslim commuities to steer clear of any provocation. The newspaper which carried the picture today tendered an apology.”

The Telegraph‘s apology, also carried on page one, read:

“The Telegraph tenders an unconditional apology for reproducing a tweet by @iPoonpandey in Monday’s edition of t2. The publication was the result of a technical error. The Telegraph had no intention to hurt the sentiments of any community. We sincerely apologise for the hurt the publication of the tweet has caused.”

Adding another chapter to this episode, the West Bengal government has on Friday sent bulk SMS to various individuals, companies, newspapers and media houses directing them not to publish any further objectionable material in this regard.

According to Praveen Dalal, managing partner of ICT law firm Perry4Law and leading techno legal expert of Asia, this single episode attracts Civil and Criminal Liabilities on the part of those involved in the making, uploading, publication and circulation of the same in paper and electronic form. The Cyber Law of India prescribes stringent Due Diligence Requirements that paper based and electronic publishers must follow. If they do not follow Cyber Due Diligence, they can be Criminally Prosecuted by the Government, opines Praveen Dalal.

In fact, the Bengal government has already started the probe in this regard and the culprits would be brought to the book very soon. However, the way this episode has been handled by media shows great disregard to the laws of India, especially the cyber law of India. 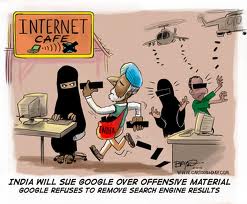 Media is India is largely Self Regulated but the Indian Government has recently formulated the Press and Registration of Books and Publications Bill 2011 to regulated “Publication of Contents” informs Praveen Dalal. The Bill has been referred to the Parliamentary Standing Committee on Information Technology for its inputs before it may be presented in the Parliament of India, informs Dalal.

Media must be vigil to follow the laws of India, especially the cyber law of India, to retain the self regulation privileges that it is enjoying. If casual and careless publications would continue, there would be no other option left for the government but to regulation their affairs in a more intrusive manner.

There could be nothing more ironic than India‘s navel-gazing TV channels having wall-to-wall coverage of Sachin Tendulkar‘s 100th international century on a night when the team’s abysmal bowling was exposed by Bangladesh – without a win against the big three in 28 previous Asia Cup matches.

The near grimace on Tendulkar’s face when he was presented with a memento at the post-match presentation said it all.

The path from No 99 has been among the rockiest he has ever traversed, but what will bother him most is that none of the last five three-figure knocks has resulted in an Indian victory. In that sense, he could be back in the mid-1990s, when he first started opening the innings in coloured clothes.

The biggest positive for India on a night, when their flaws with the ball were forensically exposed, will the end of the hysteria and hype around a record that no one considered seriously until the marketing men realised what a money-spinner they were on to.

To compare a Test century made on a lively Newlands pitch against Dale Steyn at his skilful best with a one-day hundred on a placid Sher-e-Bangla surface against modest Bangladeshi bowling borders on cricket sacrilege.

In the same way, you should not even talk of his brilliant CB Series hundred (2008) and an inconsequential Test ton against Sri Lanka [Ahmedabad, 2009] in the same breath.

But while the record itself may be an artificial construct, the effort that has gone into it is one of the wonders of the sporting world.

Ryan Giggs has been a Manchester United marvel for more than two decades now, but by the time he made his league debut in 1991, Tendulkar had already raised his bat to acknowledge the applause for his first century, at Old Trafford of all places.

That he is playing at all while approaching his 39th birthday is testament to both the wonders of modern medicine and an indomitable spirit forged in the tough-love school that was Mumbai cricket.

When Andrew Wallace operated on his shoulder in March 2006, after sections of his home crowd had booed him off on the final day of a Test defeat against England, Tendulkar was already a veteran of 132 Tests and 362 one-day internationals (ODIs).

The previous year, the same surgeon had fixed a tennis-elbow problem. Though only 33, a body that had been on the cricket treadmill since he was 10 appeared to be betraying him.

When we spoke as he was recovering, there was more than a hint of anxiety about the future. Poise and certainty had given way to self-doubt and insecurity.

“It’s not like a fracture where you know it’ll heal in four weeks,” he told me at the time. “It’s not easy to forget the injuries.

“There are times when you spend some time in the middle and the body complains. That’s when you need to hold back a bit and take it easy for a couple of practice sessions.”

There was no fairy tale return from the abyss either. He did not thrive under Greg Chappell and the two Test hundreds that he made in the 18 months after his return from surgery both came against Bangladesh.

The Indian summer that has followed has few equals in sport. Perhaps only John Elway, who won his first Super Bowl ring at the age of 37, has had such a fulfilling last act.

Tendulkar was nearly 38 when the World Cup was finally won, and his limitless enthusiasm was apparent from the way he turned up to optional practice in the days leading up to this Bangladesh game.

Some reckon that he will follow Rahul Dravid into retirement soon.

As he grew older, Dravid’s life encompassed far more than the game. Tendulkar, like Sir Alex Ferguson, seems happiest on a field of green.

What Tendulkar has taught us is that there can be no excellence without an abiding love of the game.

And as long as he can tap into the inner 10 year old, he is unlikely to walk away.