Hearts meet and melt on a Chowringhee pavement

Here’s to the spirit of Calcutta, alive and kicking in the grit of an 83-year-old selling savouries on a pavement, the compassion of a college girl passing by and the response of strangers to a Facebook post for support. 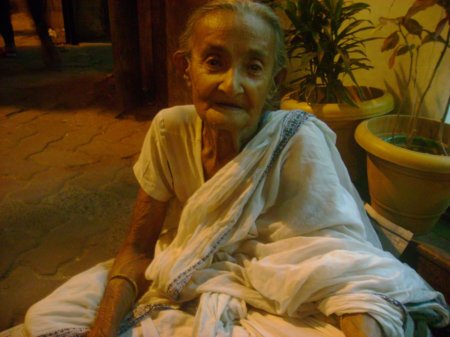 Octogenarian Shila Ghosh changes two buses to reach the Exide crossing on Chowringhee Road from Bally, in Howrah, every afternoon to sell chips on the pavement outside Haldiram till the flow of the homebound-crowd ebbs.

Her breadwinner son died of a heart ailment around six months ago and she needs the money — around Rs 150 on an average for an evening’s toil — to supplement her grandson’s meagre earnings from odd jobs.

College girl Sufia Khatoon didn’t know Shila’s story, but would often pause to watch her from a distance and wonder what circumstances might have forced a woman older than her grandmother to spend evenings working.

Sufia felt she needed to do something about it. A Facebook post later, 22 other Samaritans converged on the busy junction around 5.30pm last Friday to surprise Shila with “a small donation”.

Shila, stooping of body but upright of mind, had a bigger surprise for them.

“She accepted the Rs 1,600 we had mobilised for her but declined further monetary help. She told us she wanted to earn a living rather than live off donations,” Sufia recalled.

If the group was still willing to help her, Shila said she would rather they set up a kiosk for her. “Aami paari….Bus dhore chole aashi eikhane. Bus-ta barir samne nabiye dyay.Bikri kore chole jaye (I am capable of earning my bread. I come here and return by bus, it drops me in front of my house),” she told Metro.

Last heard, the list of Shila admirers had swelled, each member eager to ease her strain without making her feel she was dependent on anyone.

“We are dealing with someone very strong in the mind. I believe the initiative should not end with donating some money. We need to find a long-term solution to problems faced by people like Shila,” said Sanjay Dutta, a 42-year-old Park Circus businessman.

Amitava Sinha Chaudhury, a 20-year-old college student who had responded to Sufia’s post and turned up at the Exide crossing on Friday, said it would be an insult to Shila if people offered her “alms”.

“Mashi (aunt)’s never-say-die spirit should be respected. We bought almost half her stock of chips that day to help her without making her feel we were doing her a favour,” Amitava said.

Kalyani Bhowmick, 25, had stopped to see why there was a commotion around the elderly woman and ended up joining the group.

“I wasn’t aware of this group. I salute them for what they have volunteered to do and will be glad to do my bit to help Mashi in whatever way I can,” Kalyani said.

Sufia sees the spontaneous response to her plea for support on Facebook as an opportunity to carry her desire to help people like Shila forward.

“It all started with my first glimpse of Mashi. She reminded me of my grandmother and I thought hers wasn’t the age to work, but to rest at home,” she recounted.

So what made her post Shila’s story on Facebook? “I just felt I should do it and I tagged my friends. Their contacts saw the post and soon a few of us started interacting to find out how we could help. We decided to meet and the rest fell into place,” Sufia said.

On Friday, a couple of members of the group even escorted Shila home in a taxi, sparing her the usual bus ride to Bally. “Many people saw us giving her money. So we thought it wouldn’t be safe to let her go on her own,” said Amitava.

Sufia, who has just started the Facebook page OurWorldOurInitiative to further the cause, hopes her small step for Mashi would inspire a giant leap in the service of the city’s downtrodden.