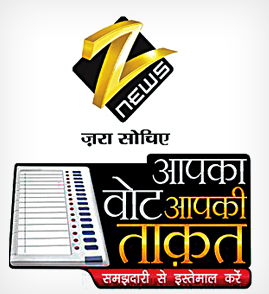 The success of Zee News, the nation’s most trusted news channel, has once more been acknowledged by the Limca Book of Records 2011-12. After its environmental campaign ‘My Earth My Duty’ was listed, the channel will find mention for organizing and executing India’s largest voter awareness campaign ‘Aapka Vote Aapki Taaqat’.

Addressing the issue of decreasing voter percentage as a part of its responsibility as the fourth estate, Zee News rolled out the campaign to sensitize voters about the importance of voting to ensure a responsive, accountable and democratically elected government.

Launched during the Lok Sabha elections in 2009 with exclusive support from the Election Commission of India, the initiative registered phenomenal success. The drive continued to make waves in the Assembly elections of Maharashtra, Haryana, Arunachal Pradesh, Bihar & West Bengal, and the recent 2012 Assembly elections. Consequently, the public service campaign is acknowledged as one of India’s biggest and most credible voter awareness drives.

In an attempt to reach the grassroots of India, given the different cultures and lifestyles, Zee News left no stone unturned. The message was spread not just on TV, but also on Radio, Internet, Mobiles and other conventional mediums covering more than hundred cities and villages. To ensure wider & maximum possible reach, Zee News also brought together various reputed media organizations with just one objective in mind – to turn the world’s biggest democracy into a force to reckon with.