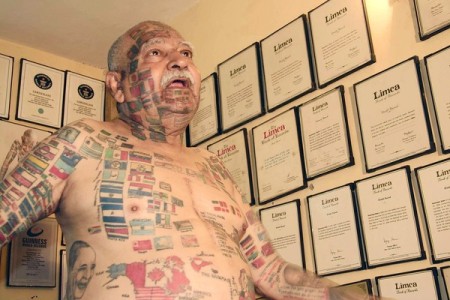 Guinness Rishi epitomizes India‘s obsession with breaking Guinness records. Officially, he has seven nods — and unofficially, many more, he says.

As a candidate in last month’s Delhi municipal elections, Guinness Rishi didn’t do any campaigning. In fact, he thinks the 30 votes he got were 30 too many. He suspects his wife voted for him out of spite.

Rishi’s real goal was to garner zero votes and become the world’s most-losing politician, complementing the seven Guinness World Records certificates on his wall. There should be 22, the self-described record maniac grumbles, but Guinness has it in for him.

Few epitomize the stretch for stardom in India more than the 70-year-old Rishi, who changed his name from Har Prakash to Guinness in case anyone had doubts about his obsession.

Up a steep flight of narrow, paint-splattered stairs, past a hairball of exposed wires and a groaning clothesline, his “election center” bedroom is jammed with old newspapers, dusty trophies and a flat-screen television blaring news in Hindi. A small bit of peach fuzz partially obscures the flag tattoos covering his skull.

Rishi caught the bug while traversing India as a salesman in the 1980s, he said, eventually clocking so many miles on his moped that local reporters picked up the story. Elevated above the humdrum by the attention, he became addicted to the bright lights — he offers up his own klieg light if you want to photograph him — and set out on his records quest.

“I’m not tall enough, I’m not the best dressed, I don’t wear the biggest turban to stand out in a crowd of millions,” he said. “To be different and get recognized, I have little choice but to keep trying to break records, or else I’ll be forgotten.”

His records include most continuous time riding a motor scooter (1,001 hours with two accomplices); producer of the world’s smallest Koran, even though he’s Hindu; fastest consumption of ketchup, though he said, “I hate ketchup”; and most flag tattoos on his body (officially 220, although he’s added 146 since then), including several across his forehead, cheeks, chin.

That last record has created a few issues at home.

“My son and wife are very angry, embarrassed walking with me on the road,” he said. “People call me a joker, a cartoon, mad.”

Those looking to break a record or create one can submit, without charge, a request and documentation on Guinness’ website, where processing can sometimes take several months. Alternatively, applicants can get a fast-track decision in a few days for $750, or for $6,500 have an official Guinness judge to witness the effort.

Rishi alleges that in several cases Guinness ended a category after he submitted information, or declined to issue a certificate while he held a record. “That’s incorrect information,” said Nikhil Shukla, the new Guinness representative in India. “Absolutely no.”

Having lost his candidacy, but not by enough, Rishi is considering running an even less effective campaign next time. One problem, he said, was that neighbors started threatening to vote for him if he didn’t give them whiskey. “I couldn’t afford all those bottles,” he said.

As he prepares to say goodbye, Rishi outlines his latest idea: to persuade Ripley’s Believe It or Not to embalm his body after his death, Chairman Mao-style, allowing people from around the world to see his tattoos, bringing great happiness to children.

“He’s crazy,” his wife, Bimla, says from the next room, near a pile of dusty magazines. “I would never vote for him; look at all this garbage in here. Why don’t you take some of this stuff with you?”

Although every country has its share of glory seekers, India has really taken to this particular form of chest thumping. Guinness says applications from India are up 178% over the last five years, making it the world’s third-most active nation of wannabes, after the U.S. and Britain, with actual records up almost fourfold. Guinness has just appointed a Mumbai-based representative to manage the crowds of record seekers, with plans to open a full office next year.