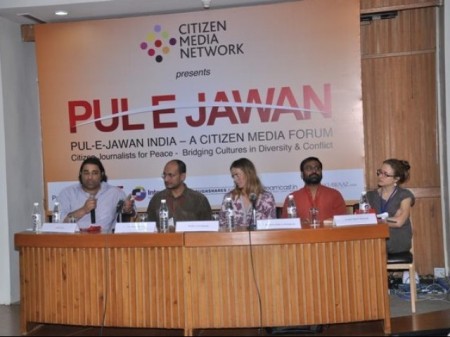 The Pul-e-Jawan country forum in India, organised by the Citizen Media Network, convened in Delhi on April 14. It was a follow-up to an event in Kabul where citizen journalists and young peacemakers from Afghanistan, Pakistan and India had met in February.

This  event was organised just two days after the Pul-e-Jawan forum in Pakistan, which was hosted by Bytes for All in Islamabad on April 11 and April 12.

So, where does the name Pul-e-Jawan come from and what is its aim? As their website states,

“Pul-e-Jawan literally means ‘Bridges of Youth’ in Dari, as well as in Urdu and Hindi. The aim of Pul-e-Jawan is to transform the conflict in South Asia by highlighting youth perspectives on common challenges and aspirations in Afghanistan, Pakistan and India.”

In addition to on the ground work, campaigns and meetings, this forum intends to use the power of social media to exchange ideas and reach out to people across national boundaries. It also looks to finding ways of carrying conversations without feeling limited by the difficulty in attaining visas.

Shivam Vij, journalist and founding member of Kafila put it quite aptly when he said at the Pul-e-Jawan country forum in India:

When you think of the other country, you first think of the border. You don’t imagine it as a country full of people, roads, street signs, food and conversations. You imagine it through images you can access, through state narratives and media narratives, and also narratives of people who have come from there.

However, social media allows you to drop into internal conversations between Pakistanis. You get to see the country in a nuanced way. You get to know a place without visiting it.

He also shared numerous examples of cross-border friendships, some of which are documented in a piece he wrote for First Post last year.

Dr Madanmohan Rao, Research Project Director of Mobile Monday, also spoke at the event about the significant role social media has played in countries like Iran, Israel, Afghanistan, India and Pakistan. He shared a number of case studies and hoped for the possibility of using social media to express, question and critique.

His ardent faith in the potential of social media like Twitter, Facebook and blogs was refreshing, especially since the speakers who preceded him seemed rather sceptical of the new media. They kept harping on the time-honoured importance of traditional forums like newspapers, magazines and television channels. What they didn’t take in to account was that traditional media and new media could work together and support each other.

Of course, one cannot overlook the fact that only a tiny percentage of India’s population has access to computers and the internet. However, using this gap as an excuse to undermine the potential of social media is unfair .

At the same time, it is important to remember what journalist, Paranjoy Guha Thakurta, said at the forum:

Social media does push the boundaries of freedom of expression. That’s great but in the midst of all this optimism about the internet, I’d like to sound a word of caution. Let’s remember that there is no substitute for going to the field and meeting people.

All these speakers at Pul-e-Jawan’s India forum gave the audience a vibrant range of examples and ways in which citizens can become media practitioners and contribute enthusiastically to public dialogue and social change.

Two other highlights of the day are worth mentioning; a talk by Dilip Simeon, Chairperson of Aman Trust and the performance of Dastan-e-Taqseem-e-Hind by Ankit Chadha and Darain Shahidi.

Dilip Simeon gave a spirited talk, emphasising the importance of speaking out and standing up against injustice and human rights violations. He introduced the audience to the concept of ‘collective guilt’, whereby the onus of acts committed by individuals is seen as synonymous with what the whole community should take responsibility for.

For example, if a politician is assassinated by the people of a certain religion, all members of that community are seen as guilty and avenged for the crime. It was a powerful concept and struck a chord with many. This was mainly because it came only a few hours after the performance of Dastan-e-Taqseem-e-Hind; a story spun around the partition of British India into India and Pakistan. It was presented in the tradition of Dastangoi, a lost art form of Urdu storytelling currently being revived by Mahmood Farooqui and Danish Husain.

The performance was very moving and got a hearty applause from the audience. It became even more poignant when Shahzad Ahmad of Bytes for All joined us on Skype from across the border. Shahzad spoke of the need to build bridges and work together on online and offline initiatives. He focused on pressurising governments for a more relaxed visa regime to enable greater inter-personal contact, which is crucial to a more humane understanding of the demonised other across the border.

Did the forum yield any tangible results?

Can one make peace seated in a plush auditorium?

Did our voices reach the people who make decisions?

These questions are bound to come up.

But there are no easy answers for them. The best one I’ve come across was uttered by Shivam Vij:

Talk shopping is very important. Chai and charcha (tea and talks) can bring aman and chain (peace and calm).

I believe in this. We can’t expect to see results overnight, but talking about peace is a part of making peace. In today’s circus of competing and conflicting voices, it is important to stand up for what you believe in. And when there are so many people believing in the same thing, a difference is a certain reality. It is just a matter of time.

I came back really inspired from the Pul-e-Jawan gathering, and I have a feeling that many others did too. (courtesy: Chintan Modi/tribune.com)